A place to share information about collecting and creating gumball football helmets.

For information about gumball helmets in general and the collecting thereof.
Post Reply
5 posts • Page 1 of 1

I bought some "Snap" helmets from David Jingo (jngz on eBay) recently which included something I hadn't seen before. 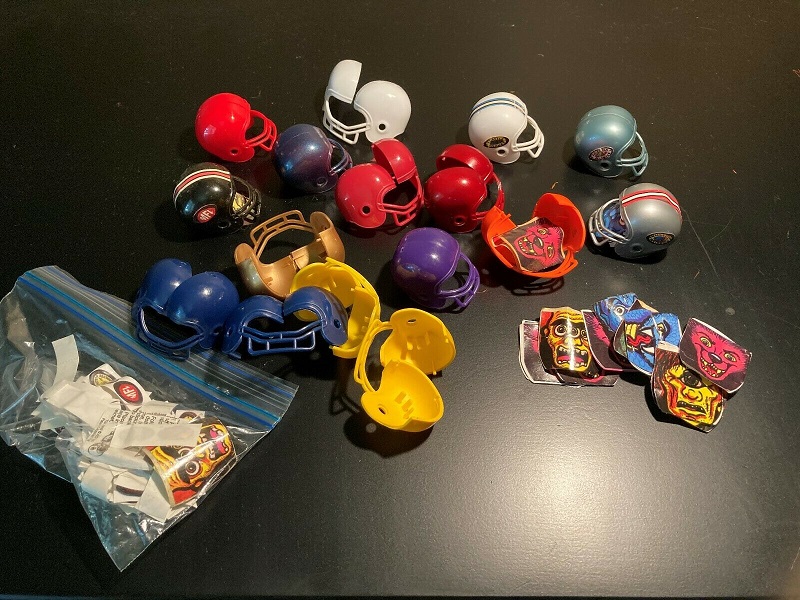 Apparently these were available in gumball machines at some point. Along with the helmets were stickers for teams in a fictional Monster Football League. In addition to the standard side logos and center stripes were faces to be cut out and put inside the helmets. The lot included whole unpeeled sticker blocks for 8 different teams: Oakland One-eyes, Philadelphia Frankensteins, Dallas Demons, Washington Weirdos, Seattle Snakes, Miami Mummies, Pittsburgh Pirahnas [sic], and San Francisco Slimers. Scan of the stickers is first attachment.

There were also loose faces which included three that were not in the 8 intact ones, and three name logos which I can only assume go with the three faces. the 3 other teams were: Cincinatti [sic] Werewolves, Arizona Aliens, and New York Nightmares. My best guess at the three matched names and faces is the second attachment. There were lots of loose stripe stickers but I have no way of guessing which goes with the face/name matches that seem appropriate.

Turns out there were actually 12 teams in the MFL. I guessed correctly on the Arizona Aliens and the Cincinatti [sic] Werewolves, but the face I matched with the New York Nightmares should be for the Detroit Draculas. Don't have an accurate face for the Nightmares, but using the one photographic glimpse I have of one, I have recreated the following attached sticker for the four teams in addition to the 8 in the previous post.

And with that I have recreated a full set:

John, do any of the MFL cards, papers or stickers have a date of manufacture on them?

I’ve attached pics of my NFL “stamp dispensers” version of the snap style. They were vended by CDC (will need to research this company) and have a printed date of 1993, and the Patriots logo confirms this.

I was wondering about the date on yours to see which was made first. Thanks

No, the back of the stickers is blank. All the information on them is viewable in the scans above.

I tried looking up anything related in the US trademark database, to no avail. The company is/was apparently Anna Communications International, but I don't find anything interesting about them anywhere, either.
Top